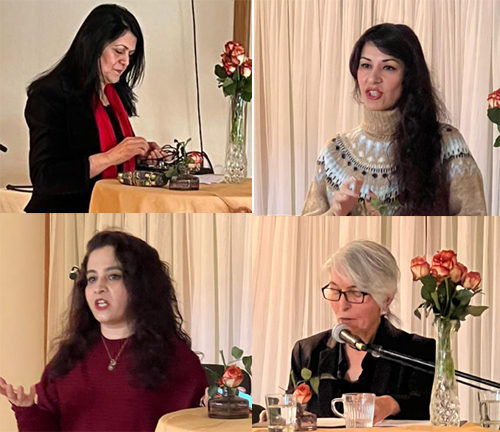 Sunday, March 06, 2022 – For the first time since crossing the Chinese crown, the Stein Association held a very successful program to commemorate Women’s Day (March 8), which was attended by about 60 people. Stein usually holds such events not on event dates but on Saturdays or Sundays.

This year’s program also started with a welcome. The participants then stood in respect of the victims of violence against women in Iran and Afghanistan and remained silent for thirty seconds. The guest speakers were then introduced to the audience, who went behind the podium in order to talk about the day.

Invited to the event were poets, writers, analysts and activists in the field of women’s freedom and equality, Niki Mirzaei, Fereshteh Ziaei and Nadia Tarighi in the first part of the program and Nasrin Pakkho in the second part, respectively. These friends also recited poems about oppressed women in traditional societies, especially in Iran and Afghanistan, which were warmly received.

In general, their message in this program was summarized with the focus on the efforts of Iranian and Afghan women for freedom and equality. From the pressure of the patriarchal and religious society on the women of both countries, from the child of the wife, from the compulsory hijab and from the disregard for the rights of the women of such societies.

As usual, Stein entertained the participants every year between the two parts of the program with supper and Fika cakes and sweets. The last part of the Women’s Day celebration program was performed by Fariborz Karami’s music group and sung by Nasrin Pakkho and the inspiring Mirzaei, who was the honorary guest of the program.

The organization of the program in this event was very good and calculated. Special thanks to all those involved in the performance of the 8th of March ceremony of the Stein Association, who formed a good and successful team with their time and coordinated effort. In the last minutes of the program, bouquets of flowers were presented to the speakers and to the women participants. The Women’s Day program is organized by the Stein Association in collaboration with ABF Göteborg.

There are no upcoming events at this time.